As grad of MIT (Massachusetts Institute of Technology) with a degree in Aerospace Engineering, Justin Pucci gets to tinker with rocket propulsion systems daily. This exposure eventually led to Justin’s desire to dabble in the world of RC. Justin began flying on Thanksgiving 2009 and his first heli was a T-Rex 500 ESP, but as most of you have experienced, the fleet quickly blossomed into a plethora of different helis as the addiction set in. Justin has owned and flown over 40 helicopters from all major brands. His current fleet is a KDS Chase 360, a Goblin 770 Competition, a Goblin Speed, a TDR, and Diabolo Speed #40. In addition to flying as a hobbyist, Justin is one of four co-hosts of the weekly podcast RC Heli Nation. As an RCHN Co-Host, He has authored several technical tips on all things RC helis related, reviewed many products for various companies, and provides technical help on weekly shows. Justin enjoys the thrill of competition, constantly pushing himself further and further. “I competed in the 2014 IRCHA Speed Cup in the Unlimited Class and placed 6th. I plan to become more competitive in the future and will be competing in all three speed classes at the 2015 IRCHA Speed Cup.” States Justin. Welcome to the team! 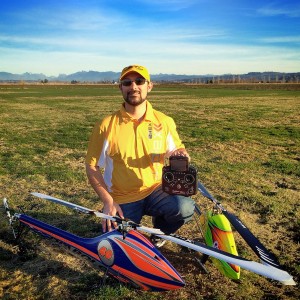