Chuck first got started in the hobby in 1984. His first love was RC Fixed Wing. Once the late 90’s hit, chuck became addicted to the world of helicopters. He was involved in a local flying club called the Tulsa Glue Dobbers, where he and many other friends would fly Helicopters.  With-in the last few years, some of his flying companions at the club decided to break off and create a Heli Club called Broken Arrow Rotors. In only a year’s time, the Broken Arrow Rotors club managed to turn an abandoned county nursery into a quality RC field, building a shelter and installing power. You can find Chuck and his club-mates attending several Funflys, including IRCHA, throughout the year. ” I competed in the IRCHA Speed Cup the first two years it was held, and I plan on competing in sportsman class this year.” States Chuck.

Welcome to the team Chuck! 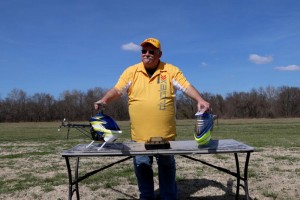